The Architecture of Association 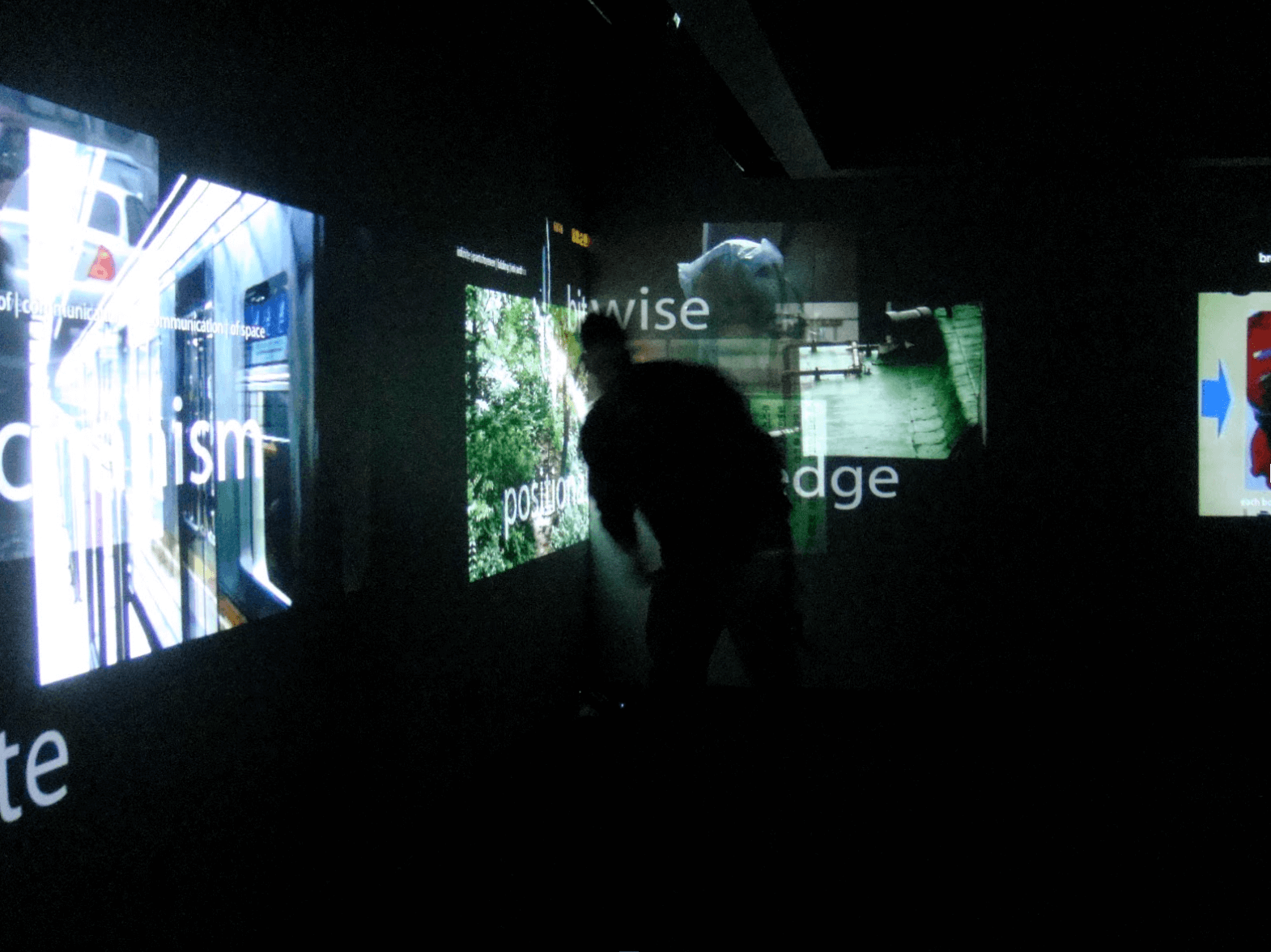 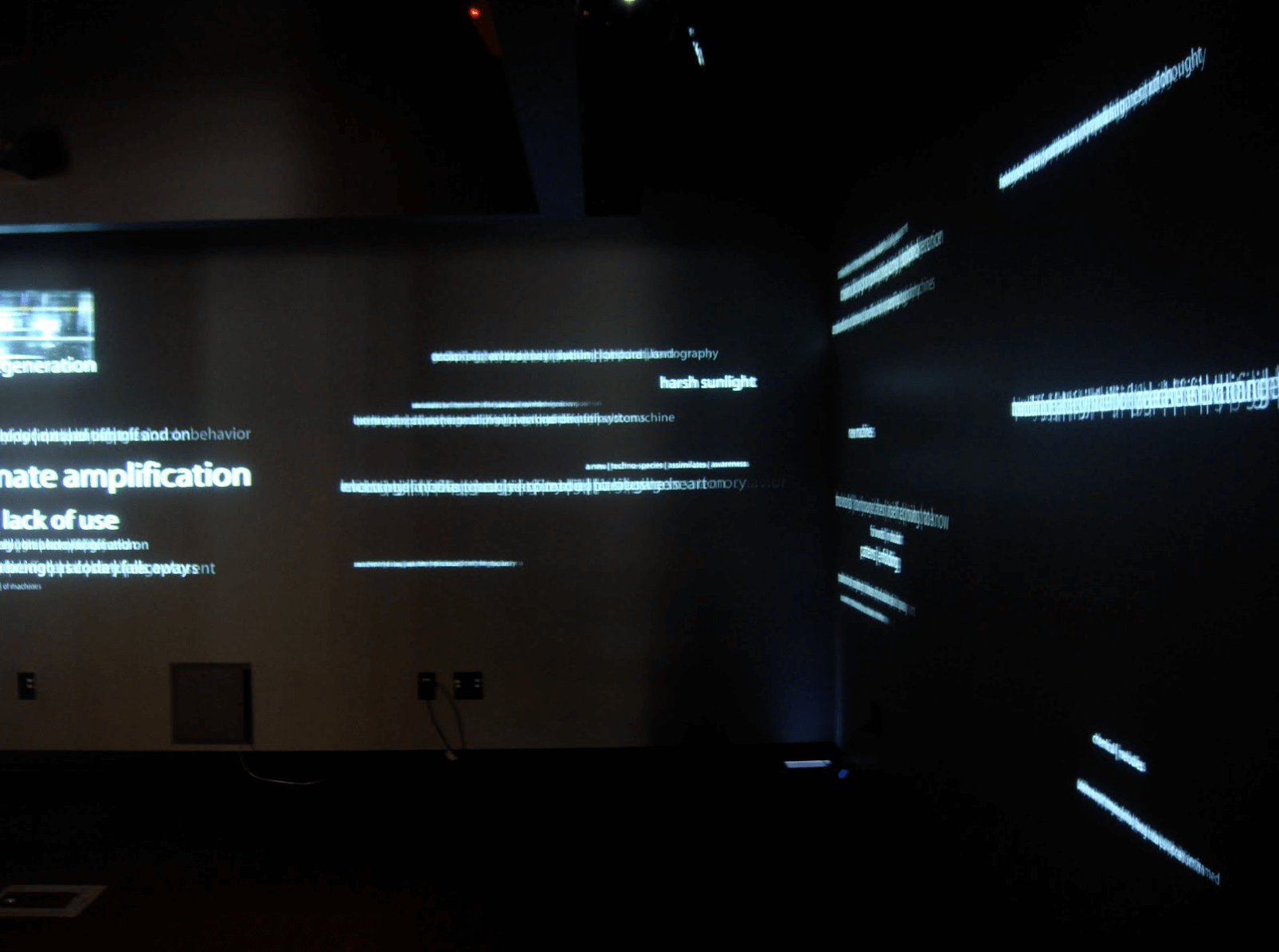 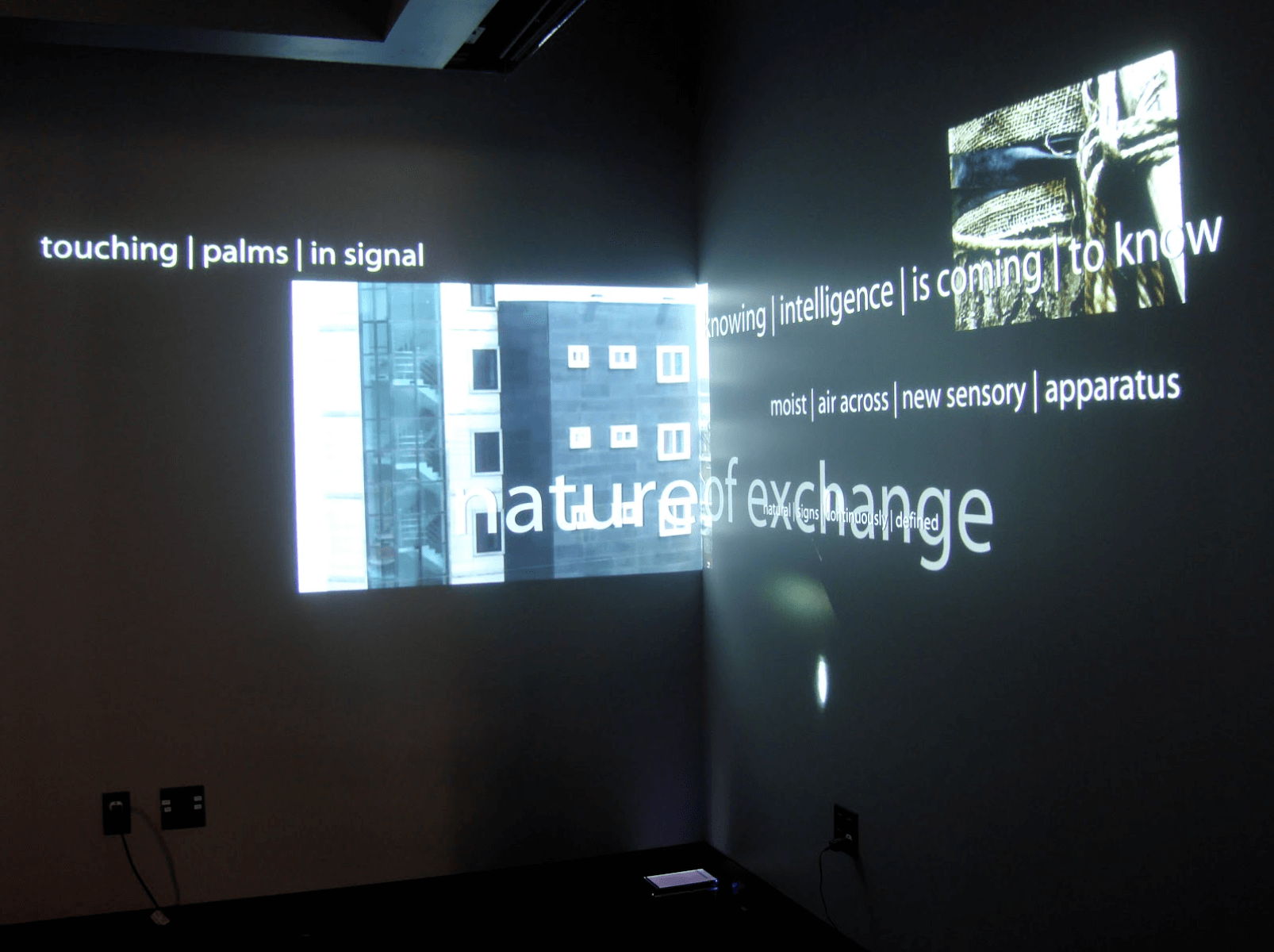 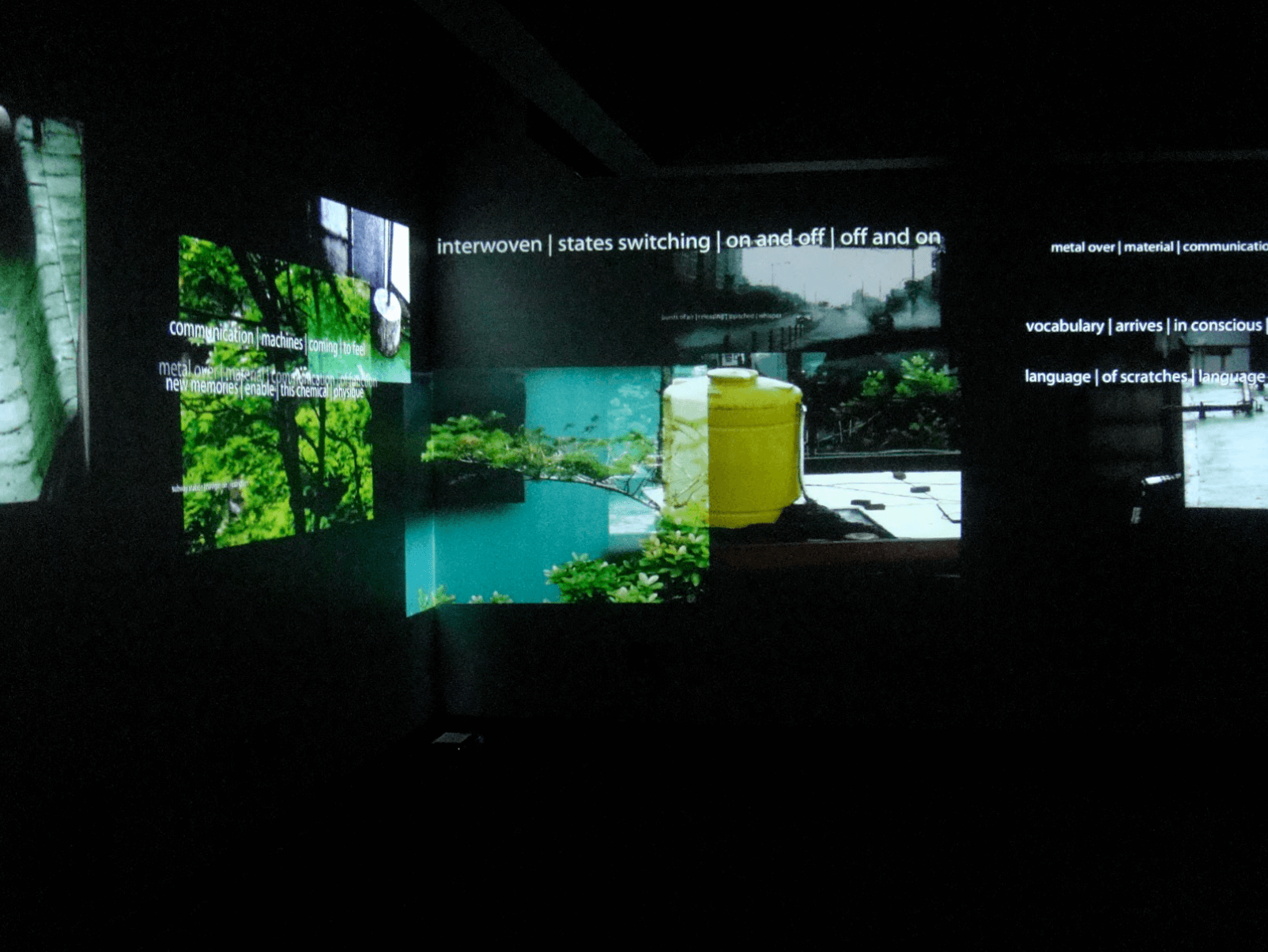 2008 The Architecture of Association

The Architecture of Association is a large-scale, generative artwork that draws associative links between media elements to form an evolving visual collage. A distributed flow of image, video and poetic text is "intelligently" distributed over a number of display surfaces. As the work is emergent in nature, it does not repeat sequences of images or texts but instead dynamically generates a continuously recombinant network of associations. In 1995, Seaman coined the term 'Recombinant Poetics' to articulate a set of generative virtual worlds.

The Architecture of Association is a large-scale, generative artwork that draws associative links between disparate video images, and poetic texts to form dynamic and evolving visual and textual collages. A distributed flow of text, image, and video dissolve and “intelligently” become distributed along a line of 12 monitors. As the work is emergent in nature, it does not repeat sequences of images or texts, but instead forms a continuously recombinant network of “generated” media associations. This set of screens form a complex associative unity. Images shot in Seoul Korea form the visual subtext. In 1995, Seaman coined the term ‘Recombinant Poetics’ in his Ph.D. thesis to articulate a set of generative virtual worlds. The Architecture of Association builds on this concept of recombination to create a generative media landscape from underlying associations.

The work passes through particular overall “associative states” including “red”; ”green”; ”brown”; “elevator”; and “night”; along with its normal functioning.

The work was premiered at MIS Museum (The Museum of Image and Sound) Sao Paulo, c2008

Version 2.0 was premiered at the Dans La Nuit, Des Images, Grand Pallais, Paris (in conjunction with Le Fresnoy). It had 12 vertically oriented large scale plasma screens. The voice over is included on the DVD over this video documentation.

To enable the creation of dynamic associative collages, the Association Engine (AE) stores a range of media elements (text, images, sound, and video, etc.) within a relational database system. Each media element is tagged with a range of meta-data used by the AE to ‘intelligently’ recognize semantic, linguistic and structural relationships between items. Each such relationship is weighted according to the strength of the association and then situated accordingly between the target concepts. For example if the engine is analyzing possible relationships between items A and B, it might recognize term C, whose association with terms A and B has strengths of .8 and .4 respectively. C would then be situated in ‘association-space’ at a distance from A that is twice the distance from B. This represents a simple binary relationship.

Multiple terms/concepts can interact in such a scenario so that the spatial relationship requires multi-dimensional mapping. These relationships (an undirected graph with edge-weights representing relationship-strengths) are used to dynamically situate new terms within the evolving visual representation so that media elements are appropriately mapped in a dynamic collage space. Here, C's relatively strong relation to D shifts it (along the y-axis) away from A and B, though their relative strengths (2-to-1) remain fixed. More complex relationships can be represented similarly in 3 (or more) dimensions.

The work unfolds as follows. An initial random image/word/or short section of text is positioned in a particular zone. The system will then search for an appropriate association in the media database. This process continues over time with each newly added element forming associations both with existing elements and newly 'located' media elements within the database. Each new element dissolves into the collage in its appropriate position, due to the graph of its associations, potentially across multiple screens. Together, multiple screens form a coherent “associative” unity, bridging multiple “associated” topic areas which flow across the 12 screens.

The work will use key-words, meta-data and custom clustering algorithms to make “informed” selections from the databases, bringing associative material into proximity for a particular duration. These informed selections will create a network of changing relations, stimulating thought and reflection on key concepts poetically related to “communication”. Thus this “collage” of associations functions as a generative “idea bank", with sets of relationships dissolving slowly in across the set of screens, then dissolving away only to be replaced by a new set of media materials drawn from the databases. The system is always generating new juxtapositions.

The work seeks to provide a continually changing set of “intelligent” associations that are designed to trigger ideas and additional associations/concepts in the minds of passing viewers. Thus a primary goal of the installation is to continually provoke thought, drawing viewers into active contemplation of their own associative process. Where other works might be ignored over time, this work attempts to be provocative in an ongoing manner, continually renewing itself in an emergent fashion. An ambient audio will also play in the space. 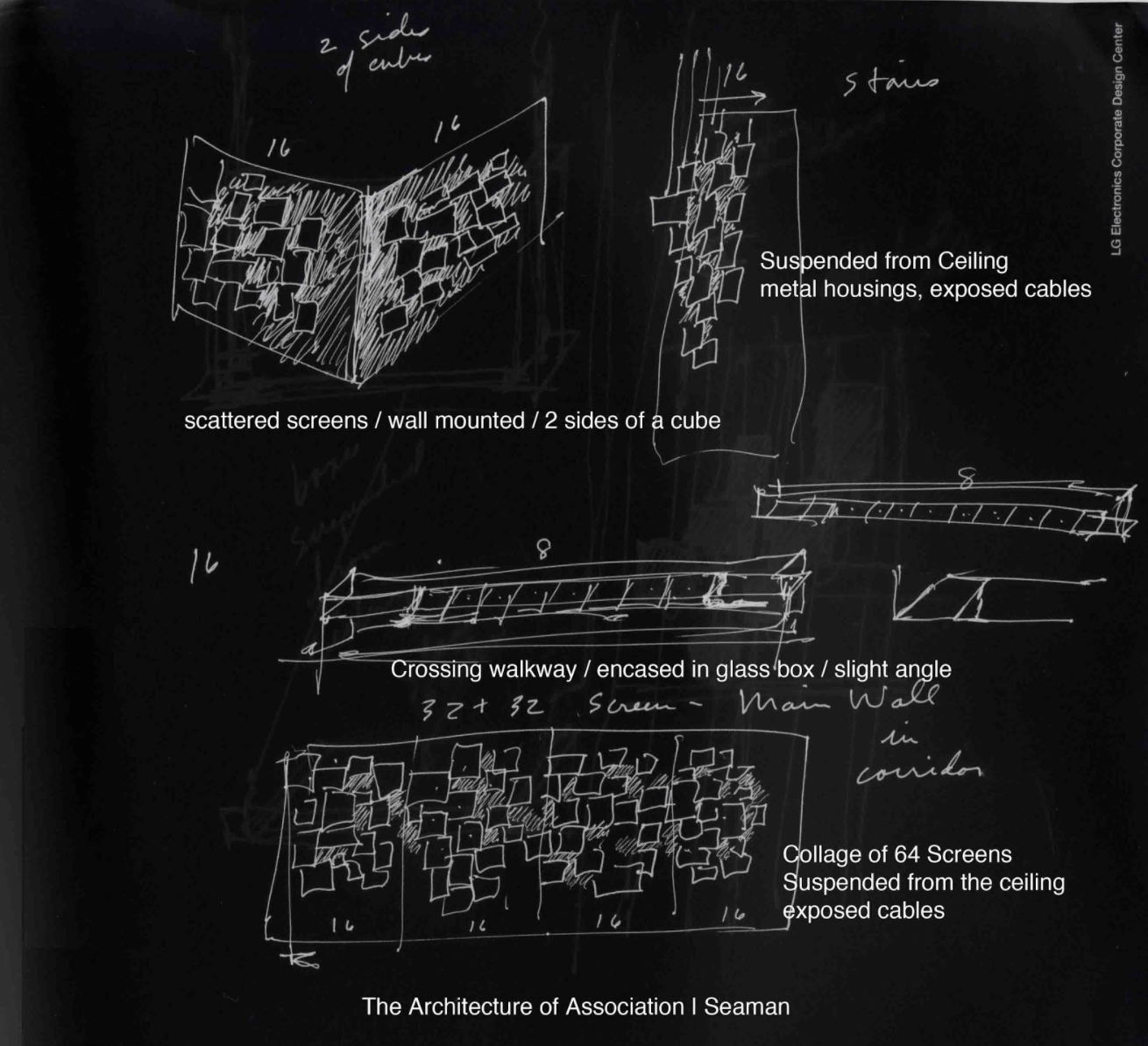