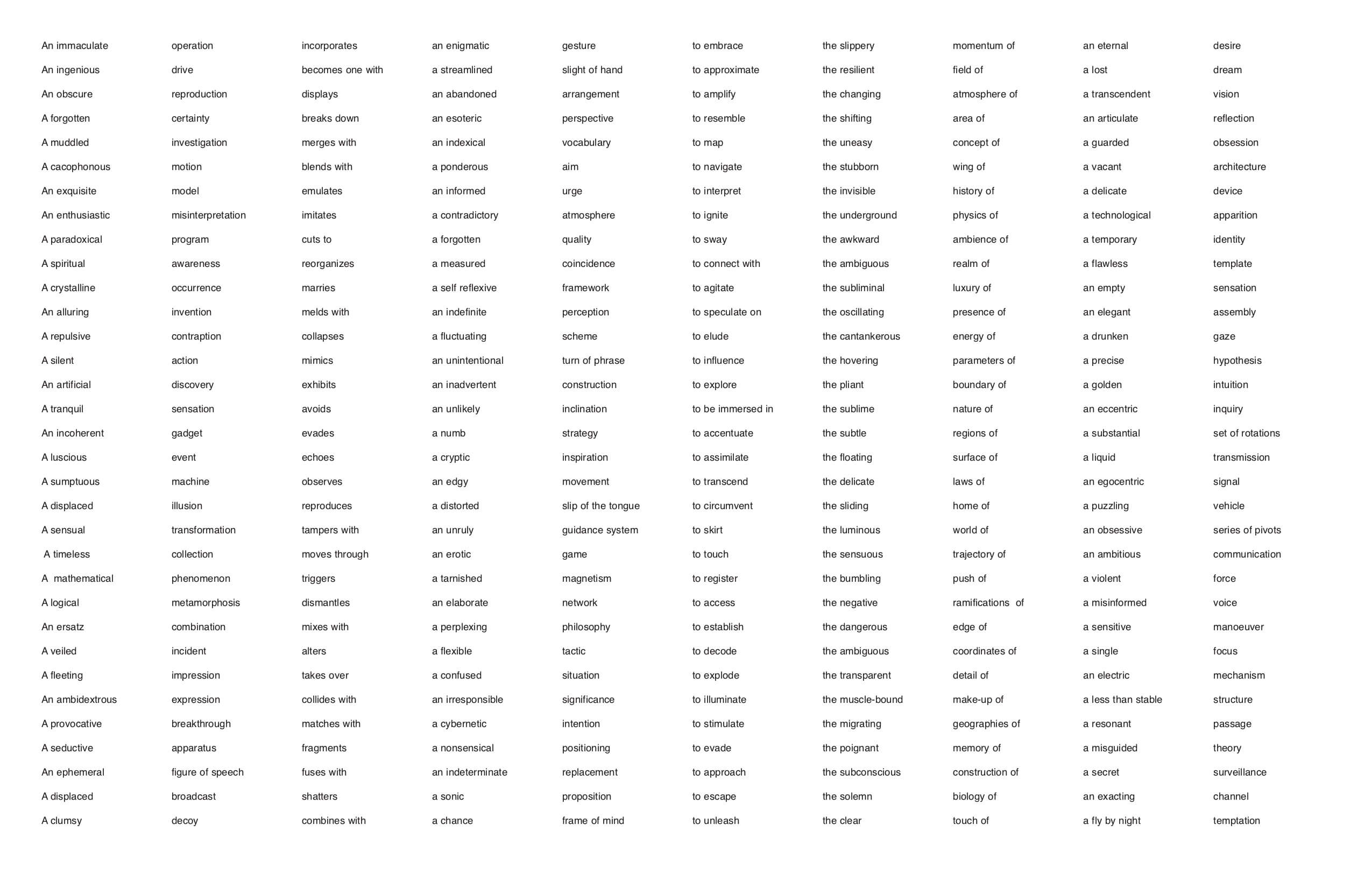 The Exquisite Mechanism of Shivers


The second major interactive installation was entitled The Exquisite Mechanism of Shivers (1993). It should be noted that many of Seaman's works were shown in different states and /or alternate contexts. Each version of the work informs other versions in varying ways i.e. this work appears as an interactive installation with a single projection, a 10 screen video wall version, a Japanese/English Version - Ex.Mech (1994), 30 minute linear video as well as a CD Rom version that was published in Artintact 1 (1994). The work explores the construction of an audio/visual sentence with 10 segments. Each segment has a related piece of music, a specific spoken piece of text and time-based section of video. The template of the work has 33 variables for each modular section of the audio/visual sentence - thus the linear work is comprised of 33 sentences. Interactive versions of the work enable the user of the system to substitute different modular variables and generate new audio visual "sentences". These substitutions always facilitate the generation of a grammatically correct sentence. Because each of these modules is poly-valent in terms of their meaning, the work is always emergent. One can also use automated chance methods to derive new audio/visual sentences. A linear video also exists with this title and date.

Thought Bridges. The bridging of the conceptual distance between a visual image and a word, within a sonic field forms the moving center of THE EXQUISITE MECHANISM OF SHIVERS. The work seeks to examine the process where a conceptual distance between chosen elements is navigated, disappears, and becomes a focus within itself. Content is generated through the viewers process of navigation. THE EXQUISITE MECHANISM OF SHIVERS presents a partial catalogue of word / image / sound relations. Superimpositions and/or collisions of definitions are presented-- word to image to sound, as well as image / language / sound - module to module. Disparate entities trigger a field of thought elements through their relative positioning and re-positioning. A thought vicinity is under construction / deconstruction / reconstruction . Landscape sets and still lives suggest fields of correspondences from images to and from skew words to their destination in thought. Connections become conceptual vicinities. The location in mind is an accumulation of vicinities which houses a set of correspondences / intersections, reflecting the fields and their related triggered memories. Being one with a stream of variables, floating, is the key.

The resonance of felt connection is propagated through a concentration of sound / light energy. The transference of a collection of observations / intuitions is a primary intention. Action from a distance. The accumulation of the fields becomes a thought object / building. Heisenberg's smile and Tesla's grin reflect upon this spark that jumps the skew gap. The word / image / sound modules qualify and / or are qualified. The bridging becomes an architecture in itself reflecting the internal behaviour of thought.

Fields of meaning resonate in a relative manner in the light of their frequency and temporal positioning. These fields are brought from and to light functioning as a network of modular reproductions derived from the locations of everyday life. These concentrations of focus live as ephemeral light configurations, presenting sites, surfaces and clues regarding the architecture of passing and of passages. The relative fields of connection are brought into proximity and bridged through observation and projection, generating a fluid (sliding/revolving) architecture of change. The infinite building of definition and meaning evolves. This flux housing of cognition / association in itself becomes a focus through the instantaneous thought processes associated with conceptually bridging the fields of potential readings. Malfunction illuminates function while negotiating this network, observing both the clarity and debris of thought. As the process continues one explores exploded meaning. The images are sometimes emptied, filled, re-investigated and projected upon, to be moved / held in thought . A landscape of scattered association and personal reflection forms the content [in relation]. The fields are concentrated and alternate layers often are revealed through subsequent viewings.

Spokes forming the wheel of possible meanings function like a turnstile / ta shunt / a catalogue of shivers. The shiver is a fragment as well as an oscillation. Exquisite Corpse is a game built of fragments. A shiver is also a biological function. Each word / image / sound module forms a field of potential meanings, a set of spokes, a wheel in itself. This wheel spins off in all directions to access a temporary meaning from this field of potentials [one spoke becomes a singular trajectory of thought]. The viewer generates a thought placement in relation to their memory set and as well as to the relative proximity of one module to another through the process of navigation. The spin maintains stability while holding up the fragile vehicle of language in relation to a frame of reference, an instance of use [a context](the positioning of one spoke in relation to a larger set of spokes [in motion]). The chance stoppage of the wheel functions as a machine to generate word / image puns [I spoke of this]. Displacement illuminates placement. Using an adjacent replacement strategy the word / image / sound module is shifted visible [into a context]. The location of meaning (locution) is illuminated through this relative positioning. Configurations of the quasi-stable / semi-random state between - are observed, triggering movement from place to place in mind. A potentially new experience is available to both the viewer and the artist based on the chance generation of sentences through subsequent navigation. In the construction of the work, a strategy of working backwards was employed - starting with the findings, the puzzle was built in reverse - an answer that asks questions. This process begins with a set of source pictures of potentials. This constructed network of fragmented meanings expands / evolves / erodes, yet is defined within a solid template.

An opportunity to observe and explore this landscape of mind is generated as one layer of content. The lives of the fields, the half lives, fall into place one for another, as substitution sets define an architecture based on change. The network is generated as an infinite set. Transparent intersections become a focus from viewer to view. The fields of meaning carry these oscillating sets of potential. Word / image / sound modules with floating meaning are navigated in this realm of oscillation. For example a pocket knife -- this device/pun object/image is presented, displaying the attributes of folding / collapsing and expanding while pointing at multiple functions / potentials / valence / denominators. A periodic table of elements, combined and recombined, forms the compound [sentence]. The alchemical realm becomes sonic and luminous. The entire template is constantly cast in the changing light of alternating currents.

A word is in itself an image. The weight of a word suggests a particular choice. This weighing of vocabulary defines the substitution sets [the loading of the dice]. Words are to images as thoughts are to the receiver/navigator. One can witness a stage where the child inserts all objects into the origin of words... It is at this time that one experiences a first taste of language. The substance of words continues to float at the tip of the tongue. Linkages / dockings, words from / form moving islands. Like linked vehicles released and rejoined / reconnected. a train of thought slides before and through the window of process. A subtle negotiation of substantiation is always under construction, always mobile. The subconscious is informed through the continuous reception of fields of meaning. The mouth of chance falls open, swerves / pivots / slides... finds a housing...and eventually finds a home in the receiver. The system may flip the coinage which subsequently rotates through the underlayer, driven by the digital underlanguage [zero and the one]. A random number generator sometimes drives the potentials of light / energy as a carrier. This randomising of the network functions as an expansive trigger for associations / memories. A certain chance building becomes a housing for the potentials. An architecture built on impermanence merges with thought material carried by the viewer. The receiver informs the word / image bridge and generates this personal thought vicinity. These vicinities vary with the history of the receiver and live on and below the surface of thought as well as shift in relation to subsequent events. The machine of language is built by constantly taking itself apart and reconstructing itself while resting on that which appears momentarily stable, graspable.

Toys and robot pre-models are flexible as within the communications of play. The blurring of referring becomes learning through an inadvertent finding [momentary fixity]. Later replaced, specified, updated and shaded. Site configurations communicate as we come to understand them as a felt meaning, an internalization - bridging language, image and sound. This felt understanding shifts subtly over time. A body of thought reflects on these felt states, reflecting on reflecting. The overloading/exploding of information/meaning creates a set of conditions where the viewer is propelled into navigating this felt realm. The displaced points at placement . Nonsense functions as a contrasting critique of sense. Walls become passages. The body, the boundary, the closure, the edge, the parameters, the inside and out, all are bridged. The viewer navigates through this motion of thought, across the boundaries. The delicate edge of thought, the periphery, becomes a focus .

Lights are brought to light through light defining the fields of the branches. The transference of energy is at the center of the process. Antennas become a symbol. The transmission and reception of invisible presence. Action from a distance. The transparent flow of information, of intuition. A clear passage toward the extension of the senses. Biological mechanisms. Another set of observations register the internal organs of a post industrial, post mechanical culture. The potential passageways of intelligence and artificial intelligence. Pipes. This is not a pipe but a network of possible linkages. The one-- in / from / as the field. THE EXQUISITE MECHANISM OF SHIVERS is a device to move from one state / perspective to another. A device to extend the architecture observed and the perspectives of observation within. The tenuous fuel of transcendence is a frame of mind.

Breaking rules can illuminate their function. Navigating in this realm. 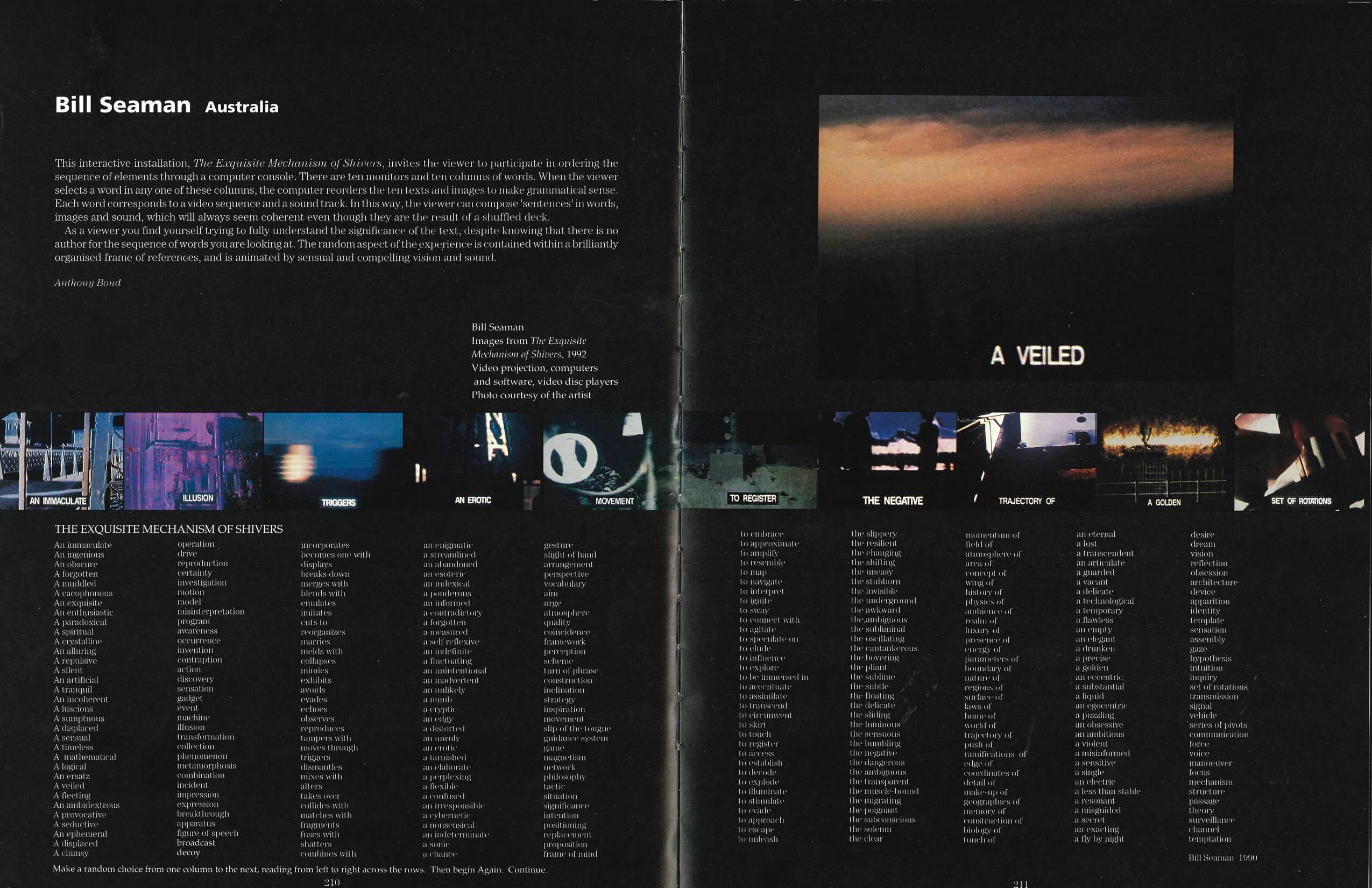 For the Boundary Rider - 9th Biennale of Sydney a special wall was constructed.

A series of 10 rear screen video projectors were used in a sequence where sentence after sentence was being constructed one image/music/text module at a time, built across the 10 screens, then beginning back at screen 1. The work was quite uncanny (for the time) because the large screen images looked flat on the wall! Additionally a kiosk with computer and video screen were presented so participants could interact with the system in a more personal manner. 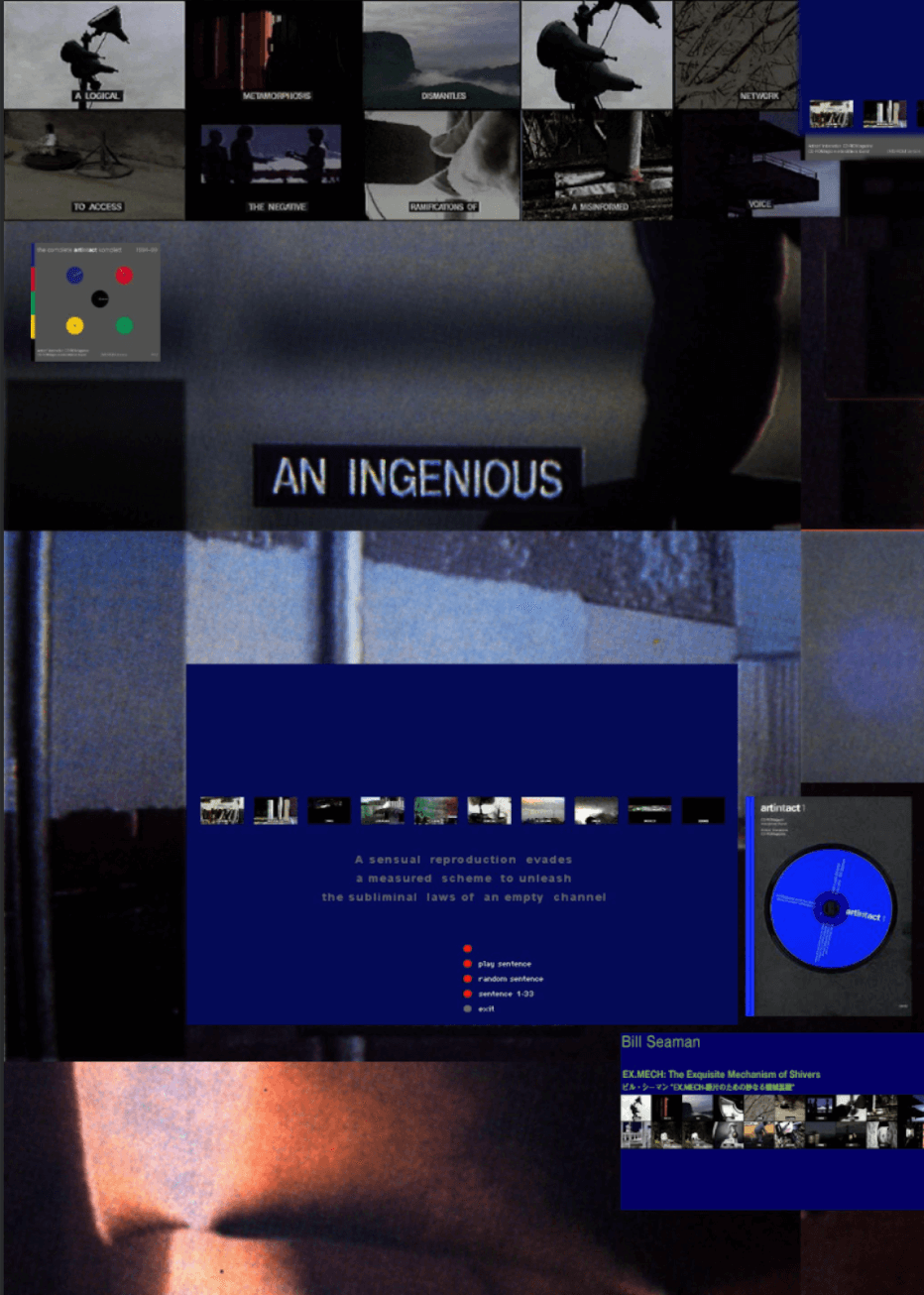 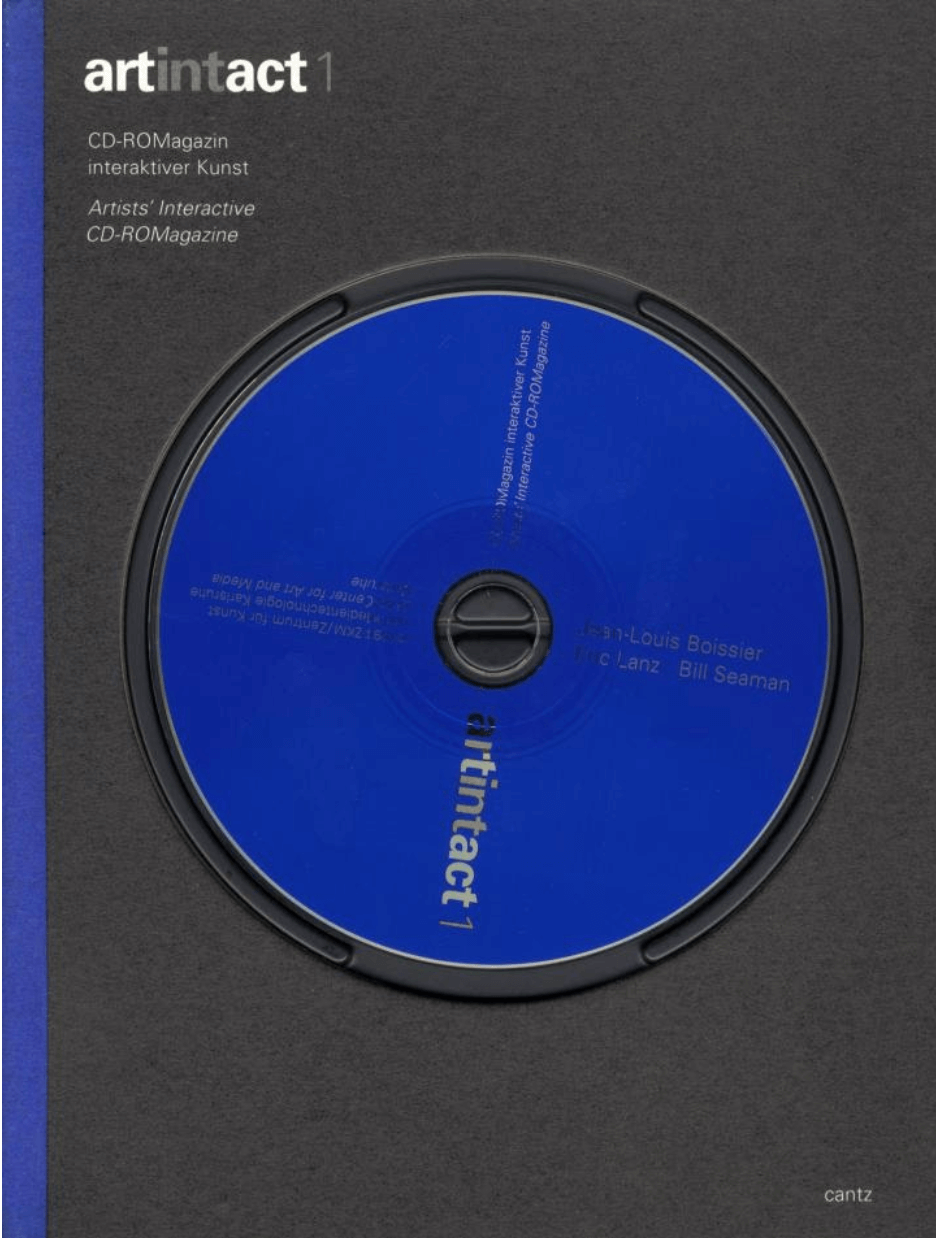 »artintact 1« is the first issue of a new interactive biannual CD-ROMagazine. The CD-ROM presents original interactive works of art, created at the ZKM/ Institute for Visual Media by artists who are pioneers in this field. This CD-ROM is accompanied by a book of scholarly essays, written by prominent media theorists.

THE EXQUISITE MECHANISM OF SHIVERS is an interactive videodisc installation which combines poetic text fragments, modular music segments and Image sequences. The work incorporates a videodisc and computer to facilitate the combination and re-combination of a set of specific word / Image / sound modules. Each module is presented as a word (or words) superimposed over a related visual Image, accompanied by a musical fragment.

The viewer selects "Words" from a poetic text on a Macintosh menu. These words function as modular linguistic sentence fragments in a preconceived sentence template which when selected, trigger corresponding Images and sound housed on a videodisc. The computer facilitates the instantaneous substitution of word / Image / sound segments within the sentence template structure as derived through viewer choice. The viewer experiences the active navigation of a series of changing poetic audio/visual sentences. The work explores pluralistic meaning through the presentation of material in continuously changing alternate contexts. Humor, visual puns, word / Image / sound play, modular musical composition, 'canned chance', as well as sence/nonsense relations are all explored. 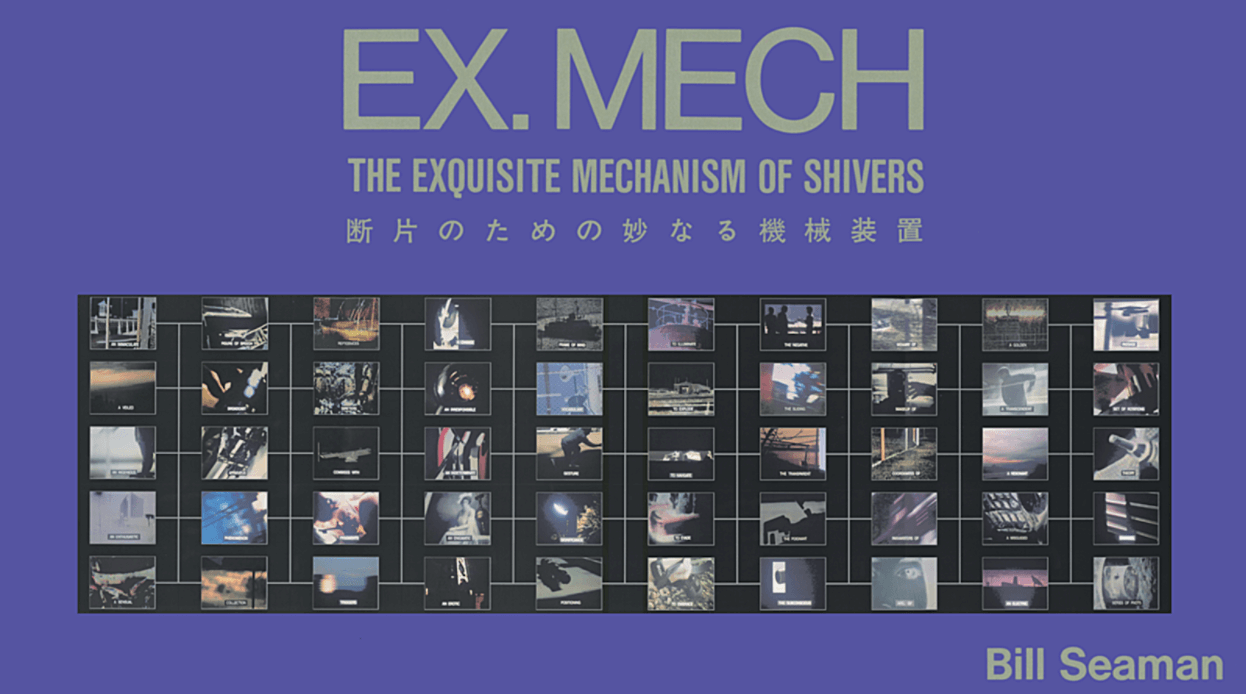 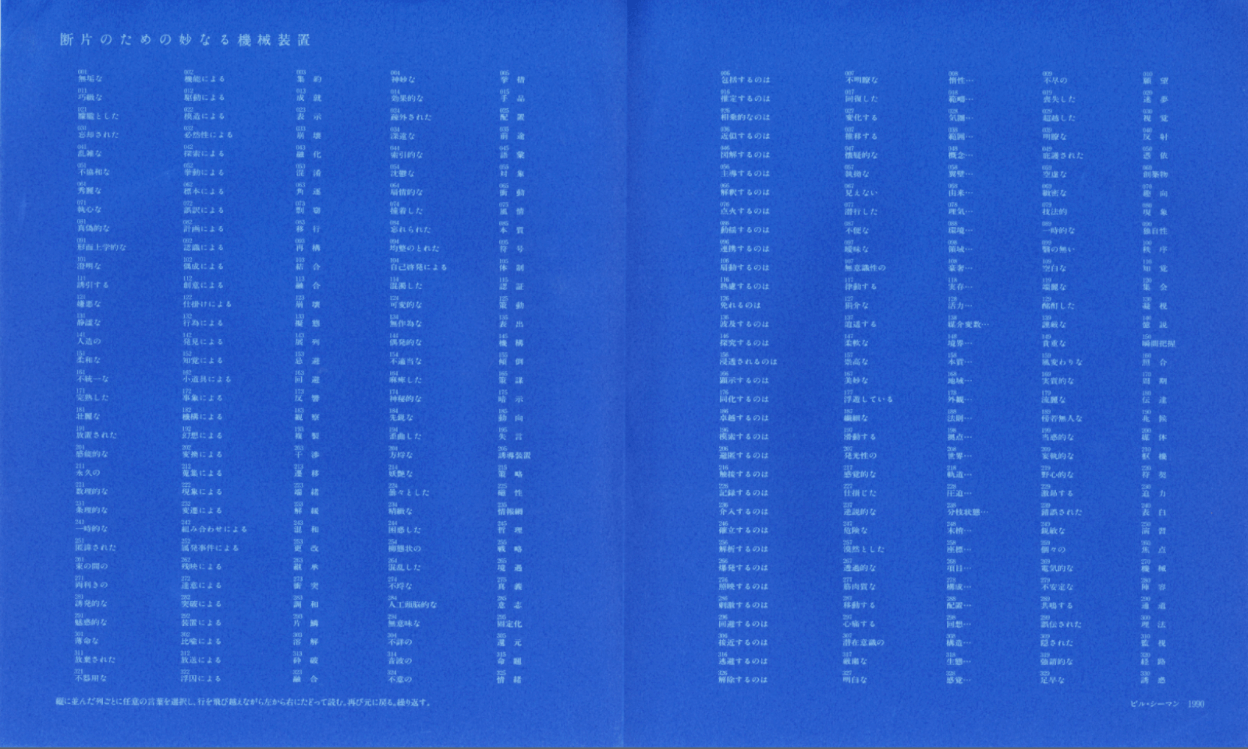 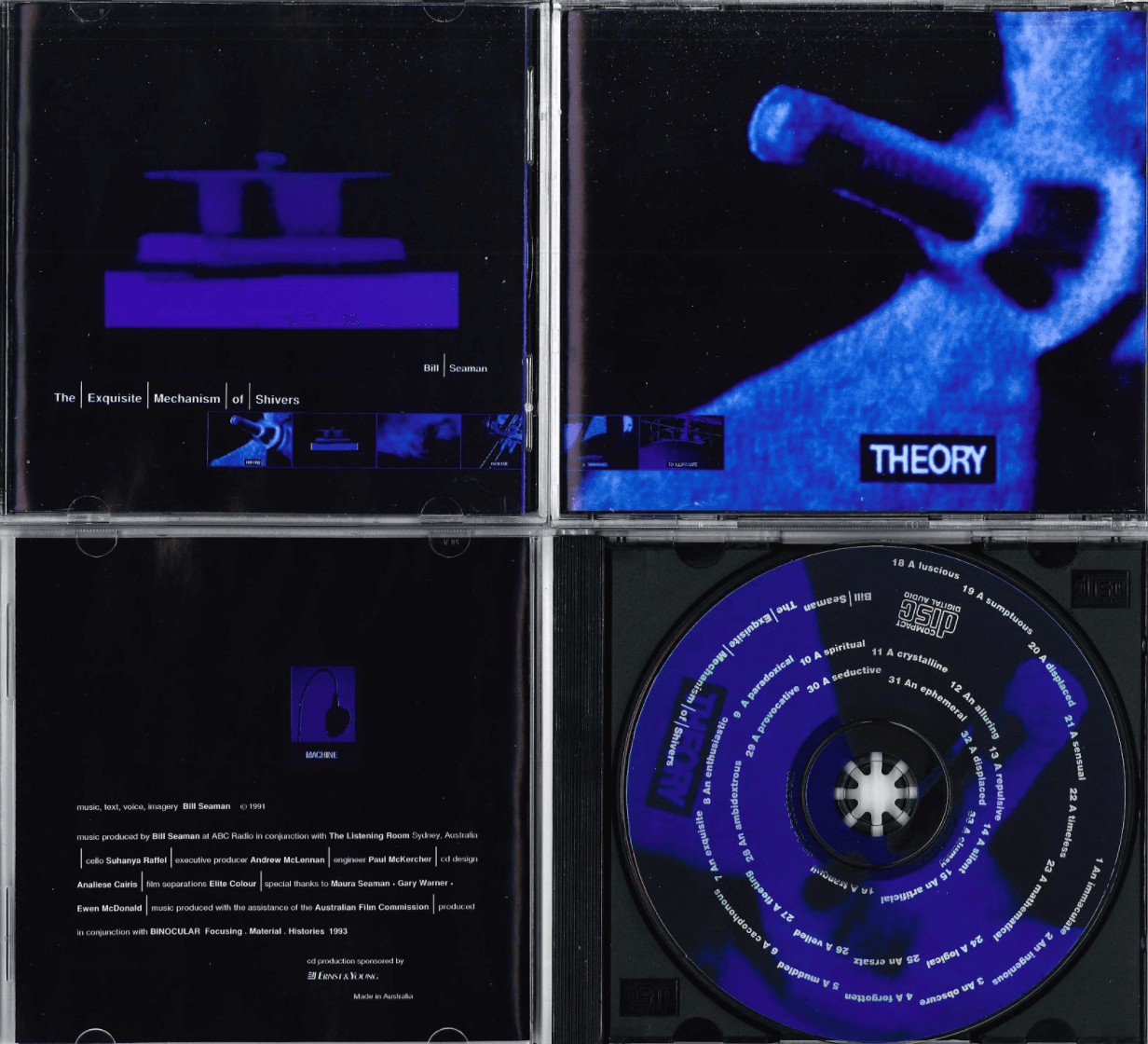